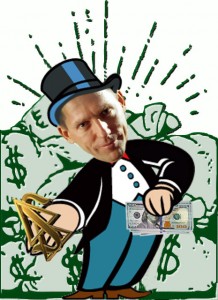 The Religious Liberty League can be viewed as the Department 20 for the “religion” of Scientology as opposed to the “church” or “churches” of Scientology.

For those familiar with Scientology organizations, Department 20 of the Church of Scientology International is the Office of Special Affairs (OSA), which oversees the external affairs of the church, among them: Public Relations, Legal, and Investigations.

Of course, as has been well-documented in cyberspace, Miscavige micro manages OSA to protect his monopoly over Scientology. See, e.g., SaveScientology.com.

Under the administration of L. Ron Hubbard, or someone with his benevolent intent, we don’t have a problem with that concept – as do, we surmise, most Scientologists. Clearly, LRH always strove to deliver standard technology for the betterment of mankind. That is how he boomed Scientology organizations.

But Miscavige does not operate the church in alignment with the religion of Scientology. Rather, he has altered Scientology technology – the religion, same thing – and uses it as a control mechanism. This, too, has been well-documented. See, e.g., FriendsofLRH.org.

Indeed, a conspiratorial mind could view the church in the clutches of Miscavige as a giant laboratory for the perfection of Scientology techniques as control mechanisms. Perhaps that’s his real intention.

Too far out there?

Consider this. In a 1952 lecture to Philadelphia Doctorate Course students, LRH said this:

“Therefore, we really do have the remedy before the assault weapon is produced. Did you ever read poor old George Orwell’s 1984? Yes, yes, that’s wonderful. That would be — could be the palest imagined shadow of what a world would be like under the rule of the secret use of Scientology with no remedy in existence.

“It’s a very simple remedy. And that’s just make sure that the remedy is passed along. That’s all. Don’t hoard it and don’t hold it; and if you ever do use any Black Dianetics, use it on the guy who pulled Scientology out of sight and made it so it wasn’t available. Because he’s the boy who would be electing himself “The New Order.” And we don’t need any more new orders. All those orders, as far as I am concerned, have been filled.” [1]

You won’t find the highlighted portion of this passage in the new version of this lecture released in 2008 by David Miscavige. It was deleted. You have to find the original version.

This deletion speaks loudly, doesn’t it?

Be the answer to that question as it may, conspiracies aside. One way to ensure that the remedy is not hoarded and held onto, and that the world does not come under the rule of the secret use of Scientology, is to break Miscavige’s monopoly over the technology.

Indeed, it as imperative. As LRH said about the dangers of a monopoly over Scientology:

●“Scientology, well understood, is a very powerful thing. Well used, it can do a great deal for the social order and for the individual. Poorly relayed, poorly communicated, monopolized or used exclusively for gain, it could be a very destructive thing.”[3]

●“As I look into the future I see that we are handling here material of a potential control and command over mankind which must not be permitted at any time to become the monopoly or the tool of the few to the danger and disaster of the many.” [4]

The Religious Liberty League is engaged in actions to break the monopoly over Scientology and make the subject available to anyone who desires to freely practice the religion.