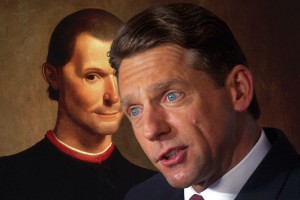 David Miscavige orchestrated this usurpation of powers. He couldn’t have done it without the active complicity of the special directors of CST who helped Miscavige convince CST trustees and general directors – as well as Office of Special Affairs legal staff members – that Miscavige, as Captain of the Sea Org, is the ecclesiastical leader of Scientology over all matters, including the decisions of the three governing corporations.

And with this false and unlawful dictate, out the window went LRH’s grand plan of checks and balances and the safeguard he created for the religion of Scientology.

Miscavige is Not the Ecclesiastical Leader of Scientology

While it may be true that Miscavige is the Captain, and therefore leader, of the Sea Org, he is not the ecclesiastical leader of Scientology he claims to be. Nor would the IRS have granted tax-exempt status had it known of his intentions. (The reason the IRS previously revoked Scientology’s tax exemption was because of what it viewed was “one big ball of wax”: all powers emanated from one person.)

One need not look any further than the CST bylaws and to LRH’s estate plan. LRH bequeathed to CST options to purchase the Scientology trademarks and trade secrets he had given to Religious Technology Center (RTC) for a mere $200. By this act, LRH entrusted the trustees and directors of CST – none of whom were Miscavige – to safeguard the religion of Scientology, and gave them the power to eliminate RTC.

Note well: these are the only written expressions of LRH intent for the governance of Scientology after his death, and they contradict Miscavige’s claims for authority.

The opinion whether the “church” of Scientology continues “to espouse, propagate and practice the religion of Scientology” is an ecclesiastical decision. It is to be made, not by David Miscavige or Captain of the Sea Org, but rather by the trustees and directors of CST.

Obviously if Miscavige were allowed to make their decision for them, or to keep them from investigating or making an independent decision, the entire purpose of LRH’s attempt to safeguard the religion of Scientology would be defeated.

The Situation Can be Handled

It only takes one trustee or one general director to call a meeting of either board, and it only takes two to pass a resolution.

Religious Liberty League is standing by to help ensure an independent meeting occurs. We have lawyers available on retainer.

If you are a CST trustee or general director, please contact us. Or if you know one, please notify and refer them to us.